Backed by the U.S. and Canadian governments, gold bullion corns and bars can be ordered from CXI branch locations. 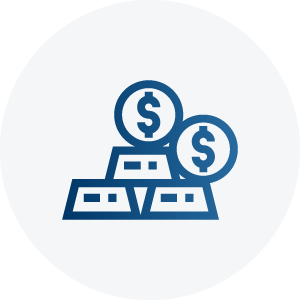 Gold continues to be an investment asset of choice for people across the globe. CXI makes the process of ordering and purchasing gold bullion coins easy and convenient for our customers.

With quick delivery, we ensure that all gold products are shipped to and received by the desired branch within two to three business days of the order being made. Our customers love the fact they can have tangible gold bullion coins in hand.

Why is CXI the best place to purchase Gold Bullion Coins and Bars? 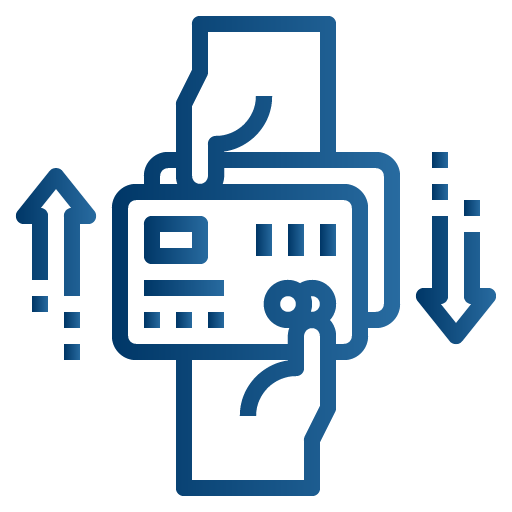 Multiple payment options for convenience and no deposit needed for any orders of five coins/bars or less. 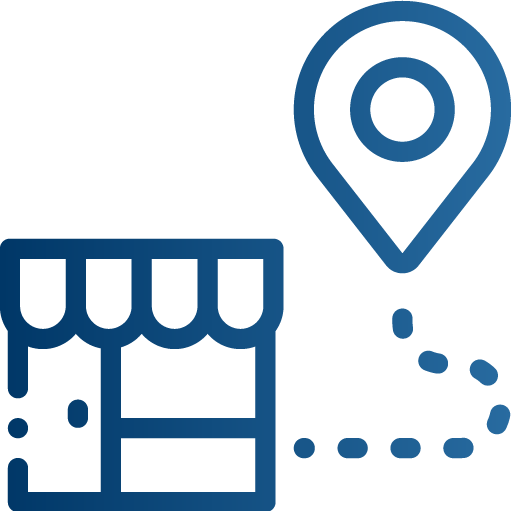 Order gold coins or gold bars by calling or visiting any of our branch locations.*

Choose from three of the most popular and recognized gold products available around the world. 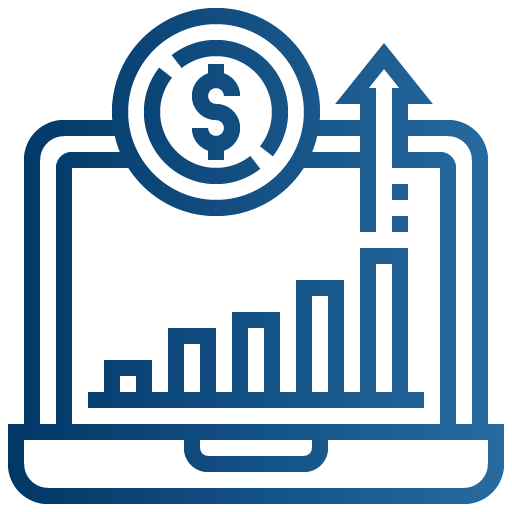 Our competitive rates for gold are updated daily and remain the same throughout the day.

What are the benefits of owning Gold Bullion Coins and Bars?

An easy way to invest in precious metals, while holding onto a physical asset that is highly liquid and recognized around the world.

Peace of mind from owning a hedge to inflation asset and it will diversify your financial portfolio greatly.

Each of our gold coin’s purity is backed by either the US or Canadian government, depending on the mint producing the product, providing comfort and security to those who hold them.

Historically gold has retained its value very well and continues to be sought after so it offers a means of geopolitical uncertainty value retention (crisis commodity). 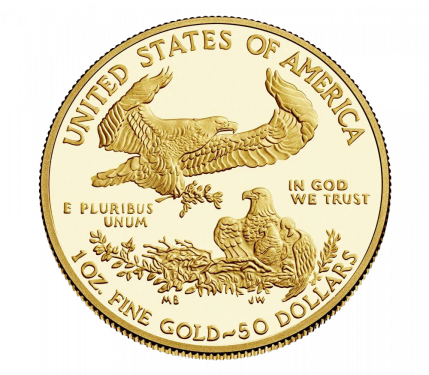 First released in 1986, the Gold American Eagle coin has become one of the most popular bullion coins in the world since the implementation of the Gold Bullion Act of 1985. The coin’s front features the Statue of Liberty as depicted in the famous $20 gold piece from 1907 to 1933. The reverse depicts a family of bald eagles and includes “United States of America”, its weight in ounces, and its legal tender value of $50.

Produced by the United States Mint, this coin is made up of .9167 (91.67%) gold and is the only gold bullion coin whose weight, content, and purity are guaranteed by the United States government. Created using gold mined in the United States, it‘s currently one of the world’s leading gold bullion investment coins. Undergoing a specialized minting process, the gold is melted and repeatedly struck so that the images seem to float above a mirror-like field on both the front and backside of the coin. The American Eagle Gold Bullion Coin is one of the most sought-after coins in the world. 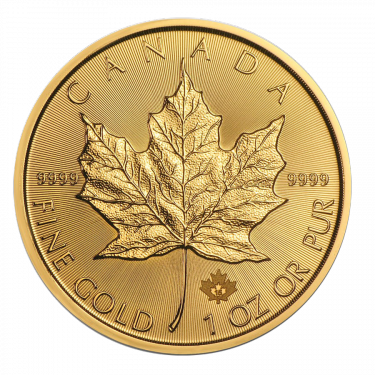 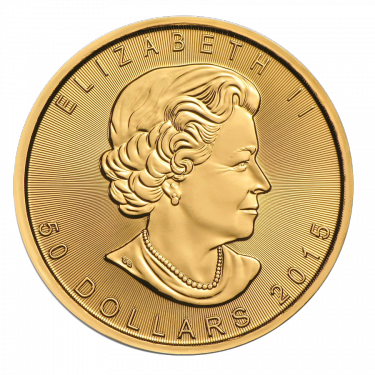 First released in 1979, the Gold Canadian Maple Leaf coin has become one of the most desirable bullion coins in the world today. The front of the coin features a maple leaf, the national symbol of Canada for which the coin derives its name. The reverse depicts Queen Elizabeth II to represent the constitutional monarch of the Commonwealth realms and the governor of the Church of England.

Produced by the Royal Canadian Mint (RCM), this coin originally contained .999 (99.9%) fine gold until 1982, when the amount of gold per bullion increased to 24 karats at .9999 (99.99%) purity. This coin is currently the purest gold coin in the market. In minting, the coin first gets melted and transformed into a continuous strip. The size, weight, thickness, and edges go through a rigorous inspection process focused on perfection. As an extra layer of protection, any coins made in 2015 and after contain a micro-engraving security feature to ensure that no replicas are being made. Due to this, the Gold Canadian Maple Leaf bullion coin has become one of the most recognizable coins in the world. 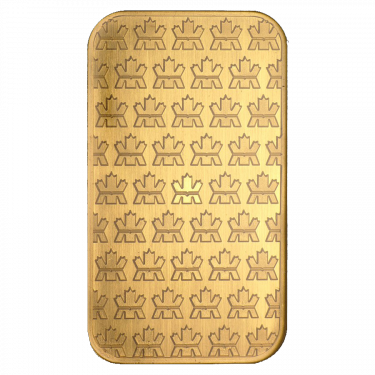 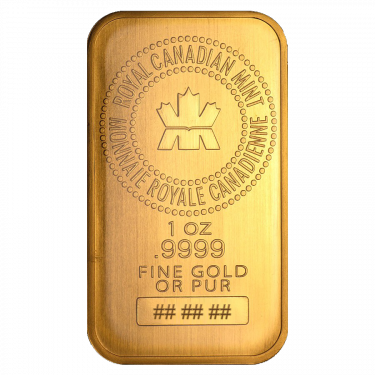 Since 1908, the Royal Canadian Mint (RCM) has been responsible for minting bullions and collectible pieces alike for Canada and for nations around the world. It’s also the only accredited gold refiner in North America manufacturing minted gold investment bars. The RCM’s reputation and standard of quality make these bars a wise and convenient choice for the portfolios of investors looking to increase their gold as well as for tangible asset purposes.

These 1 oz. bars of .9999 (99.99%) gold produced by the Royal Canadian Mint are refined to the highest standards of fine gold. Each bar contains 24 karats of pure gold and is created in a rectangular design with rough round edges. The front of the bar is inscribed with the words Royal Canadian Mint in English and in French. Below you will find 1 oz. of .9999 (99.99%) pure fine gold engraved with a unique serial number known as the ingot’s certified registration number. The reverse shows the Royal Canadian Mint Logo in a very clean pattern creating a very distinguished presentation. The bars also come with a certificate of authenticity that matches the ingot’s registration number.

I travel all over the world and sometimes the currency I need is not easy to find. Just call, order, next day pick up. It's that easy.

It was sooo stress free with this currency exchange!!! Their fee exchanged rate was the BEST I have seen yet!!! Whenever I'm traveling to Mexico I will take the drive to stop by there for sure!!!

Definitely check in to Yelp to get your 10% off! I was stressing about how to obtain Brazilian real on short notice. However, I walked into Currency Exchange International and my worries subsided.

The purer the coin, the softer it is—a characteristic of gold. The Gold Canadian Maple Leaf and Royal Canadian Mint Gold Bar are purer gold, therefore they are softer. The Gold American Eagle has more elements to it to make it stronger and more resistant to scratches and handling marks. However, all products are 1 troy oz. of gold and thus the same amount of gold is in each.

Bullion precious metal coins and bars are meant for investors. The purity and quality make them investment-grade precious metal vehicles. The Gold American Eagle is the U.S.A.'s only official investment-grade gold bullion coin. The Gold Canadian Maple Leaf is among one of the most popular pure gold coins in the world, while the gold bar is a signature product from the Royal Canadian Mint.

US demand for coins and bars in H1 of 2019 rise 38% year-on-year, largely in response to the demand dip of 2018. In the global market, China and Japan pushed demand down.

2018 saw global bar and coin demand rise 4% year-on-year, largely due to a surge of retail investment. In the US annual demand saw a slight dip due to increased volatility in stock markets and a higher gold price.

In 2017, gold bar investment remained stable but market demand for coins in the US fell to a 10-year low.

In 2016, gold demand reached its highest level since 2010, with strong sales in Q4 due to a price dip. 2016 also witnessed strong demand from China.

The market for gold products is based on gold’s market price. Since each gold coin and bar has an independent supply and demand as well as the manufacturing process, the prices do vary.

There is no required deposit for gold coins or bars when an order is placed, unless an order of more than five coins is being placed.