Why Are Central Banks Playing A Global Game Of Chess

After the European Central Bank decided to initiate an asset purchasing program, President Mario Draghi reportedly elected to unwind with a game of chess on his iPad during the plane ride back to Rome.

In a new commentary, the two portfolio managers argue that diverging monetary policies and persistently low levels of inflation mean that central banks are now engaged in a global game of chess.

Once a central bank makes an initial move to achieve a new equilibrium, it sets in motion a sequence of moves from other central banks, which is known as the opening repertoire.

Lack of coordination among central banks may mean that monetary policy remains lower for longer, leading to a semi-permanent low-yielding environment.

At the end of the Global Chess Game, we are likely left with more central bank money, higher asset prices, low inflation and low yields.

While the portfolio managers make a comparison to chess, the scenario they illustrate also bears an even more striking resemblance to a game of hot potato, in which central bankers pass each other an unenviable deflationary parcel through their relative exchange rates.

In the realm of foreign exchange, Canada, New Zealand and Australia are the currencies the two recommend shorting, while going long the U.S. dollar or British pound, since those central banks have expressed an intention to leave the chess game. 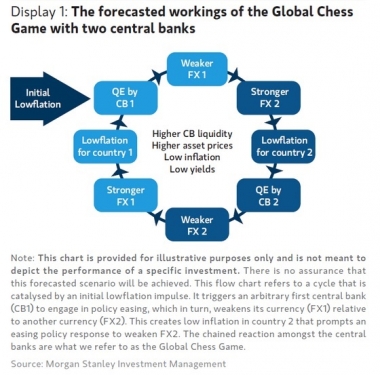 
This New Travel Jacket Has Raised Over $8.78 Million