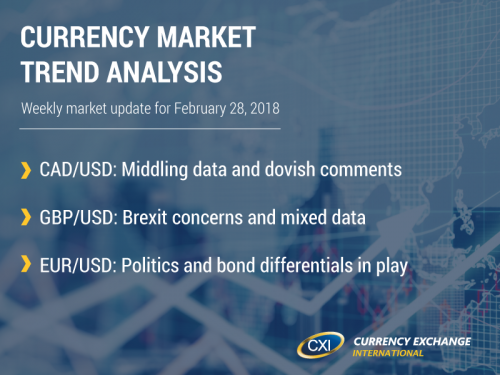 CAD/USD opened last week at 0.7971 and closed at 0.7918 – depreciating by 0.67% as Canadian data disappointed and the BoC delivered dovish comments.

The commodity-linked Loonie started the week strong, riding high oil prices. Resulting gains were however quickly reversed on comments from BoC Deputy Governor Schembri. Shembri stated that the BoC may take a cautious approach to rate hikes amid subdued economic activity, high household debt, and middling wage growth. A further pullback occurred in the wake of poor wholesale trade data (-0.5% against a +0.4% expectation). The CAD is additionally under pressure from structural concerns – namely the Canadian oil glut, US-driven NAFTA concerns, a weakened jobs report, and softer commodity prices. The CAD gained some respite later in the week from the CPI, which rose 0.7% MoM, reversing December’s 0.4% contraction. Gains, however were short-lived, with Canadian retail sales missing the mark (-0.8% MoM against a +0.2% expectation).

Canadian crude is currently selling at a discount to US oil refineries. This, coupled with increasing US domestic shale production is putting pressure on one of Canada’s main exports. Oil prices climbed towards the weeks’ end, lending support to the Loonie. This appreciation was driven by comments from the OPEC General Secretary reiterating heightened oil output cut conformity, as well as a disturbance in the Libyan oil supply line.

Markets currently expect the BoC to hold rates steady in March, with a 25 BP hike in April in the cards. At this point, NAFTA concerns will be settled, and the BoC will have a better data-driven picture of the Canadian economy’s standing. NAFTA-related news, as well as the Canadian GDP will likely be the main drivers of CAD/USD market movement this week.

The Sterling has a rough start to the week, with EU Chief Brexit Coordinator Guy Verhofstadt stating that the UK will be heading into Brexit day without a finalized trade agreement in place. He went on to state that there will likely be an annex providing the backbone of a future deal. Brexit woes continued, with sourced indicating that British senior officials are working on a Brexit contingency plan in which Brexit payments will be withheld if a trade agreement is not in place. May’s troubles continued, with Parliament reacting unfavorably to her Brexit negotiation outline, which was provided to the Cabinet less than a day before it was sent to the EU. Brexit concerns were stymied somewhat by a report stating that the European Parliament will call for the UK to have a privileged single market access.

UK data came in mixed this week, with jobless claims dropping by 7.2k against an expectation of a 4.1k increase, however the unemployment rate climbed from 4.3% to 4.4%. The UK 2017 Q4 GDP estimates was revised down from 0.5% to 0.4%. Markets are currently pricing a 65% change of a rate hike in May. Markets will look to the Friday release of the UK GDP for impetus this week.

EUR/USD opened last week at 1.2414 and closed at 1.2294 – depreciating by 0.97% as the USD gained support from bond yield differentials, and concerns arose over the new ECB VP appointment.

The ECB was caught up in some politics this past week. Latvian Central Bank Governor Rimservics (a member of the ECB’s Governing Council) was detained by the anti-graft bureau. Additionally, the ECB’s choice for a new VP – Spanish economy/finance minister De Guindos – sparked waves, largely due to his lack of economic background.

Eurozone data came in mixed, with German ZEW headlines showing improved economic sentiment (17.8 vs. expectation of 16.0), while the sub-index fell to 92.3 against a 93.9 expectation. German PPI exceeded expectations (2.1% YoY vs. 1.9% estimate).

In politics, Merkel is currently awaiting the result of the grand coalition vote. The result will be announced on March 3rd; it is currently expected that 60% of SPD members will vote in favor of the coalition. Markets are assuming a success for the grand coalition, but it is still not a certainty – expect downside potential if the coalition falls through, as there is not a strong fallback. Data-wise, the EMU CPI will be the key driver this week.